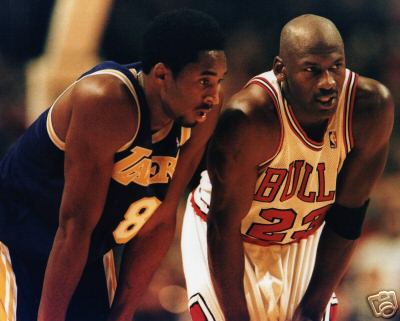 What does that title say? Does it read what I thought it did? Did he just say that basketball’s most beloved hero, savior, and 6-time champion does not match up to Kobe Bryant? YES I DID!  I dare to say what few others may be thinking.  After years and years of being indoctrinated with the fact that MJ is the best, I simply believe otherwise.  Before I attract any immediate hatred (which I’m sure I will), let me say that I have a great deal of respect for MJ and everything that he’s done for the game.  What MJ has done as a global icon of this sport is unprecedented and he deserves all the credit in the world.  However when it comes to playing the game of basketball, Kobe is in a league of his own.

First lets start with the most simplest way to define a player’s career; the amount of championships they have won.  We all know that MJ has the upper hand in that category (6 to Kobe’s 5).  But we also know that Kobe is still playing and at the rate he’s going, he could have 3-4 solid years left in him.  While we put so much emphasis on rings to validate a player’s career, in the end I believe that’s just a small factor.  What rings prove is that you can play great team basketball at its highest level and be triumphant. (Yes winning a ring is a collaborative effort and doesn’t rest on one person’s shoulders).  There are plenty of people who have more rings than Kobe and MJ; ie.  Tom Heinsohn, KC Jones, Jim Loscutoff…anyone ever heard of them? Would any of those players even be considered the top 100 all time? Exactly my point.  While rings can attest to a player’s ability to lead a team, they are simply overrated when it comes to discussing the G.O.A.T.

Next lets look at longevity.  Just the way we view a musical icon (Michael Jackson, Madonna, Jay-Z, Mariah, Elton, etc), we look at how their respective careers have held up over the years.  Many would laugh at me if I compared Justin Beiber to Paul McCartney, because the kid has only been out a few years while McCartney is a legend. Ultimately, iconic status is solidified through years and years of domination in your particular field.  (Which is another reason I feel Tupac is better than Biggie, but that’s another conversation).  MJ played in 15 seasons overall (though one season was when he rejoined the bulls with 17 games left to play). Kobe is currently playing in his 17th season and could easily amass 20 seasons when it’s all said and done.  I know the argument everyone will make is that it’s an unfair comparison because Kobe came out of high school.  Yes that’s true, but he has still been playing at a high level in the NBA for 17+ seasons which is something only Robert Parrish can relate to.   Also let me remind you that Jordan took two years off, which if anything could have rejuvenated him for a better return.

Image is everything right? Well that is something that Jordan definitely benefitted off of.  When it came to lucrative endorsements, movie deals, spokesman deals, etc., MJ was the trailblazer for that.  Never before have we seen an athlete become so widely known off the court as they were on the court.  Though some of his endorsement deals were over the top; did anyone ever buy that MJ cologne? Just sayin! Everyone from Antarctica to Greenland would be able to recognize the silhouette of that bald head.  And MJ was more than an endorsement cash cow, he was the most LIKABLE athlete ever (sorry Magic). Why am I saying all this? Well I believe that’s another reason that people are quick to give MJ the title.  Don’t get me wrong, Kobe had plenty of endorsement deals as well; but after his rape accusations in 2003, Kobe fell to the “disgraced athlete” category faster than OJ.  It is fair to say that Kobe has salvaged his reputation and rebuilt his image, but a lot of critics still hold on to that.  In addition we are constantly reminded how arrogant and selfish Kobe’s style of play is.  Which at times is justified, but I believe overall that it’s unfair to Kobe. Overall MJ had a better image than Kobe but unfortunately that UNFAIRLY gives MJ favoritism when discussing the best of all time.

While rings prove what you can do with a team, stats prove what you can do individually.  While MJ’s stats have been highly regarded and impressive throughout the years, there’s one stat that Kobe has that MJ could only read in awe…81 pts! C’mon really, 81 pts this day in age in basketball? That’s the equivalent of hitting 100 home runs in one season or throwing 10 touchdown passes in one game.  It is that ridiculous! (in my Stephen A. Smith voice) A lot of times sports analysts will dismiss Wilt’s 100 point performance because of the fact that Wilt was merely playing with 6-footers, there was no 3-second key rule at the time, and many other advantages that Wilt had.  Nonetheless its amazing.  However in the year 2006, 81 pts is a remarkable feat that I don’t believe we will ever see again in the game of basketball.  Jordan’s high game is 69 pts and he needed an overtime for that.  As a matter of fact MJ scored over 60 pts five times, and in four of those occasions he needed overtimes to put up those numbers.  Kobe scored 81pts in regulation.  And if that’s not crazy enough, he once scored 62pts in 3 quarters (opting to sit out the 4th)! Do I even need to mention that Kobe reached the 30,000 point plateau 4 years faster than MJ?

My final comparison is the respective teams that both Kobe and MJ played for.  First I would like to commend both athletes for sticking with their respective teams through the good and bad for their whole careers (exception when Jordan was on Wizards…but who really counts that anyway).  Lets start with the Bulls.  And I’m going to say something that is undeniably true…MJ would be NOTHING without Pippen.  Plain and simple.  No championships, no MVPs, and no 70 win seasons.  To put things in perspective, prior to Pippen being acquired by the Bulls, MJ had a losing season every year.  After Pippen arrived (87-88 season) the Bulls went 50-32 and were ranked #3 in the Eastern Conference.  Facts don’t lie.  Subsequently they went on to reach the playoffs every year, produce 6 championships, and a record 72 win season.  Jordan had the privilege to play with Rodman (arguably the best defender of all time), Pippen (arguably the best all-around player of all time), Kerr (arguably the best clutch shooter of all time…sorry Horry), and Kukoc (arguably the most versatile 6th man ever). Now let’s get to the Lakers.  Yes I know what you’re thinking.  Kobe had the privilege to play with the most dominant center of all time.  I agree and will say wholeheartedly that Shaq was integral to the Lakers first 3-peat.  But here’s where things get interesting.  After Shaq departs and the team splits up, Kobe was left with the Sparks to play with.  Yes Smush I’m talking about you! Kobe showed ultimate perseverance and determination to make his team a Championship contender again.  Throughout these tumultuous years, Kobe carried the organization on his back.  Kobe did more with less than any other star of his caliber.  I’ve never seen any player, with the exception of Iverson (in Philli) and Lebron (in Cleveland), carry their respective franchise on their back year after year like Kobe. We live in a time were every NBA player wants to take the shortcut to win a championship.  Players leave their teams to form all-star squads with other players in hopes of getting a ring.  We saw it with Boston in 2007 and with the Heat in 2010.  Kobe stuck with an organization that was in need of substantial changes, and ultimately brought 2 more championships to the Lakers with a supporting cast that includes no future hall of famers.  If you look up the word resilience in the dictionary you will see a picture of Kobe.  If you switched Kobe and MJ around, and Kobe got to play with Pippen, Rodman, etc he would have had at least 9 rings!

In closing, let me be clear that I am a MJ fan and have a great magnitude of admiration for him.  He is one of the top 5 players all-time and very few can even be mentioned in the same sentence as him. However I believe that Kobe is better.  Kobe has matured into not only one of the best of all time, but also one of the best leaders we will ever see.  Kobe has a fire that burns in him that is unparalleled to any other player I have watched.  He truly maximizes the talents around him and makes every teammate a better player.  And there’s all this talk about Kobe being selfish? Let me ask you something.  Who was the player that infamously abandoned their organization to go play baseball for two years? I rest my case.